“Amanda looked at her. It was a whole separate life that she had created: that was the miracle of parenthood, and it never seemed to be anything less of a miracle; you made a whole world; several worlds–one for each child. And then let go of those worlds, as a creator might do of a world he has created; you let go and watched.”

When I look towards the lake, I see a graveyard of aspen stumps, like sharpened pencils poking out of the land. Seventy trees are gone.

We foolishly took down the green wire fence that had protected us from beaver chew, thinking they might remove a few big ones that were blocking our view.

Instead, we have devastation. We came early April to put the fence back up, but there was too much snow. A month later, they had chewed down even more.

The little memorial I had made for our cat, Smooch, once nestled among the aspen, now lies exposed.

Every time I look out the window, I feel uncomfortable. I am hoping that on our next visit, the green leaves that will be out on the remaining trees will help. It will take years for the little ones left to grow to a decent height.

For now, the stumps are reminders of how important our newly installed green wire fence is!

…”they had taught me something after all–not about figuring out how to wait, of course. But about living, fully, even while you’re waiting for whatever it is you think you want.” 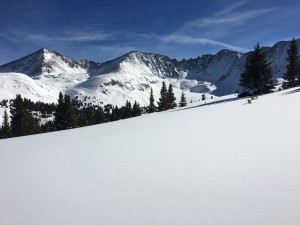 I am incredibly grateful to be able to climb to a spot like this and absorb it’s peaceful beauty. I am grateful that it exists, that I have the strength to get myself there and that I am able to be present in the delight it provides. 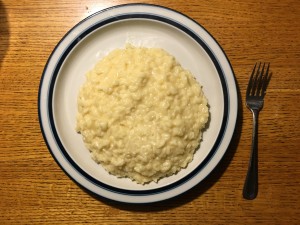 I have always enjoyed making risotto. Adding the broth one ladle at a time, letting the rice dry out before adding more. Gradually, watching it become a creamy mass. This time I added a little of my Mom’s saffron. I found it in a packet in her kitchen cupboard when we were preparing her house for sale. Inside the packet, a thin, waxy paper lining held the rust colored spice, like a rare golden dust that I sprinkled into the broth. Mom would have enjoyed a taste of this!

In the novel, Clara and Mr. Tiffany, written by Susan Vreeland, Clara says, “You know, bicycling isn’t just a matter of balance. It’s a matter of faith. You can keep upright only by moving forward. You have to have your eyes on the goal, not the ground. I’m going to call that the Bicyclist’s Philosophy of LIfe.” (p. 144).

There were four poems in particular that really resonated with me, “A New Morse Code,” “My Son” (my favorite), “My Arms Won’t Let Go,” and “Almost a Year Old.”  I found myself a little teary eyed at times reading them as your words and imagery really captured a lot of the feelings I have experienced when my kids were smaller and it really made me miss those days when they were babies.   I really like the part in “My Son” when you say “you, who have made my love rise, a full river flooding the bank of my heart, my son, my precious son.” I just thought that perfectly describes a mother’s love for her child.  I also really liked the part in “My Arms Won’t Let Go” when you talk about all the tasks that you could be doing lined up “like un-assembled parts on a conveyor belt.”  That is exactly how I feel most of the time!  I am trying to turn it off (or at least slow it down!) and choose instead to “walk” and try and savor my kids’ youth.  I will treasure these collection of poems and I’m sure each time I read it (as my kids are in different stages) I will relate to them a little differently.

I was particularly struck by the “Hallway between Two Doors” and the mixed emotions of excitement for motherhood and nostalgia for the passing phase of your life. I remember feeling that very vividly, recognizing that once Theo arrived that part of my life was forever closed, even if for the better.

I also loved the sentiment of the poem “My Arms Won’t Let Go.” While there are times when I yearn to put Theo down to sleep, there are other times I just want to hold him and look at him, even though there is so much more to do than I can ever seem to get done these days. But I know that these times when I can fit him in the nook of my arm will pass by so quickly, and while there are pictures and ways to capture it, there is not quite a camera that can capture the exact angle and all the senses that go along with Theo asleep in my arms.

Anyway, thanks for putting words to a lot of the sentiments of motherhood.

After three busy days, I finally have a free morning. There is a stack of items on my cedar chest waiting for mending. I retrieve my sewing kit and pull out the collection of threads. Threading the tiny needle is a challenge. I switch to a bigger one. As I make each stitch, I am struck by the quietness of this activity and how antiquated it seems. I was taught this by a generation that has passed. Most would simply throw away these ripped items. Perhaps, I should be doing that myself. Instead, I am enjoying the motion of the needle through the material, how it pushes through and then loops around, closing the gaps. Everything seems so different than the way it was when I grew up. When I told my students about riding my bike through a narrow path in the pine woods, or imagining things as I played outside in my backyard, creating my own inner world, they looked at me with wistful faces and said, “We want to have that, too.”

I have embarked on a major de-cluttering project in the basement. When I left home, my mom told me to keep a shoe box of receipts for each year. I have done this religiously and am now shredding “a box a day.” Right now, I am processing 1986 and it is fascinating to see a number of things: my checking account interest was 5.25%; many of the retail stores I did business with are now gone, i.e. The Denver Dry Goods; even names of former hair salons and dentists bring back vivid images. It feels good to do this!

As I walk to Whole Foods to pick up a few more ingredients for Christmas dinner, I pass by a tall hedge that spans half a block. A raucous chatter emerges, all from tiny birds which have made this their habitat. Hearing them sing brings a smile–and a reminder that gifts are all around us each day!